According to England’s ONS (Office of National Statistics) the Consumer Prices Index including owner occupiers’ housing costs (CPIH) rose to 9.3% as at November 2022 while the Consumer Prices Index (CPI) rose to 10.7%. CPIH & CPI in October 2022 was 9.6% & 11.1% respectively. Although the annual rate eased between October and November 2022, the rates in these months are the highest observed for over 40 years. It was also noted that, “The October figure was the highest annual CPI inflation rate in the National Statistic series, which began in January 1997”.

The largest downward contribution to the change in both the CPIH and CPI annual inflation rates between October and November 2022 came from transport, particularly motor fuels, with rising prices in restaurants, cafes and pubs making the largest, partially offsetting, upward contribution. 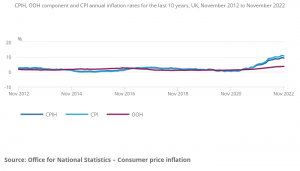 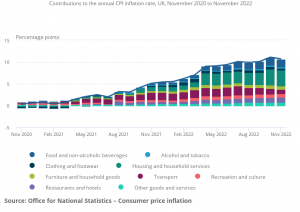 Analyst Certification -The views expressed in this research report accurately reflect the personal views of Mayberry Investments Limited Research Department about those issuer (s) or securities as at the date of this report. Each research analyst (s) also certify that no part of their compensation was, is, or will be, directly or indirectly, related to the specific recommendation(s) or view (s) expressed by that research analyst in this research report.

Company Disclosure -The information contained herein has been obtained from sources believed to be reliable, however its accuracy and completeness cannot be guaranteed. You are hereby notified that any disclosure, copying, distribution or taking any action in reliance on the contents of this information is strictly prohibited and may be unlawful. Mayberry may effect transactions or have positions in securities mentioned herein. In addition, employees of Mayberry may have positions and effect transactions in the securities mentioned herein.